What's the problem?
Surface melt produces more mass loss than any other process on the Greenland Ice Sheet. However, there is significant uncertainty in the connection between the supraglacial, englacial, and subglacial hydrological systems and the evolution of these within a changing climate. Features known as firn aquifers retain liquid water in the pore spaces of the firn layer and occupy a part of the englacial hydrological system of some temperate glaciers or regions of the ice sheets.  Observations of expansion of a firn aquifer at Helheim Glacier begin in 2010, which necessitates a longer and more spatially expansive time series analysis.  In addition, while aquifer recharge has been observed in response to high melt, the link between changes in atmospheric forcing and multi-decadal aquifer response has not been thoroughly investigated.

What methods do we use?
We use data from two airborne ice-penetrating radar systems designed and operated by the Center for Remote Sensing of Ice Sheets (CReSIS). The CReSIS accumulation radar system is an ultra-high frequency radar that images approximately the upper 500 m of the ice sheet. The water table (upper surface) of the firn aquifer can be identified as a high-amplitude reflector within the accumulation radar data. The CReSIS Radar Depth Sounder system images to the ice sheet's bed. The firn aquifer can be identified via its interference with subsequent reflections, so the disappearance of the bed reflector can indicate the presence of water.

What are our primary results?
The key results of our study include: (1) we generated a time series of four perennial firn aquifers in southeast Greenland from 1993-2018 using the CReSIS ice-penetrating radar data; (2) the four firn aquifers first appear and subsequently expand upstream toward the ice-sheet interior during the time period; (3) firn-aquifer expansion is correlated with decreasing firn cold content and recent high-melt years.

A radargram from the CReSIS accumulation radar system highlighting the water table of the firn aquifer near Helheim Glacier. (Altered from Horlings et al., 2022)

2 - Modeling the impact of horizontal divergence on firn-air content

What's the problem?
Methods to calculate the mass balance of the ice sheets using repeat satellite-altimetry observations require knowing the spatial and temporal variability of a measure of the amount of air in the firn layer (called the firn-air content; FAC). Estimates of firn quantities such as FAC calculated from firn-compaction models remain a large source of uncertainty within these estimates of mass balance. The spatial and temporal variability of firn quantities including FAC depends on factors such as climate and ice dynamics; we investigated the effect of enhanced layer-thinning on FAC estimates, which has been historically neglected in FAC estimates.

What methods do we use?
We formulated a layer-thinning scheme into the Community Firn Model (Stevens et al., 2020) and ran several experiments focusing on Thwaites and Pine Island Glacier, Antarctica - regions that have and are experiencing high and rapidly changing horizontal strain rates.

Profiles showing depth-density and depth-firn-air-content for the firn models in the CFM for Summit, Greenland. (Altered from Stevens et al., 2020) 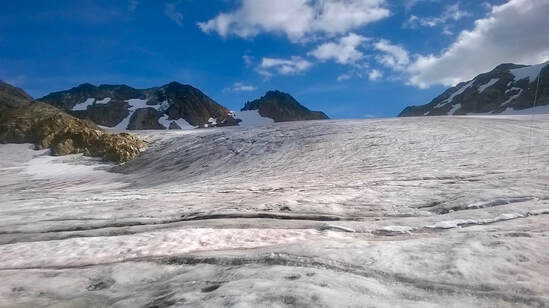 View up to the accumulation zone of South Cascade Glacier.

What are our primary results?
Simulations show that calving through the proglacial lake appears to have very little influence on the overall length and thickness of the glacier. Overall, climatic variations expressed through the ELA are the dominant effect on the fluctuations in size of South Cascade Glacier since the Little Ice Age. This work was part of my undergraduate thesis.